January 14th, 2016
Facing north, I take my first pedal stroke at the end of the road in the southernmost city in the world, Ushuaia in Argentina. For the next three and a half years, massive mountains, deserts, rivers, seas, high plains, tropical forests and megacities stand in my way, but I carry on, as far as the road takes me, driven by the mystery of this world and its people—“what is the north like? Who lives on the other side and what is their way of life?”

June 28, 2019
My journey to the north comes to a halt as the road quickly turns back south in a circle as if it has suddenly realised its mistake. In front of me, an immense Arctic Ocean stretches until the horizon and beyond. I have reached the end of the road in Tuktoyaktuk.

Tuktoyaktuk is the terminus of the northernmost road in Canada—the Dempster Highway—the only road in Canada that takes you past the Arctic Circle. It is a 900 km unpaved road in Yukon and Northwest Territories crossing the tree line on to tundra and ending up at the Arctic Ocean.

The Dempster Highway passes through one of the world’s last wildest places. As I cycle the Dempster, I feel as if humanity has disappeared from the face of the earth. The biggest stop for first five hundred kilometres, Eagle Plains, has a population of only nine. For several hundreds of kilometres, a gravel road is the only sign of human intervention in the land mainly inhabited by bears, caribous, foxes, and other wild animals.

This is the land of the midnight sun. Further up beyond the Arctic Circle, the sun doesn’t set for a month. At midnight, as you face north you see a giant ball of fire bounce off the horizon like a basketball. This is nature’s playground after all. Here when the wind blows, the earth moves in waves like the mane of a wild horse.

Then there is delicate permafrost. The ground underneath is permanently frozen as it has been for thousands of years. Trees cannot grow tall here as the roots cannot penetrate deep enough because of the frozen soil. A thick layer of gravel makes up the foundation of the Dempster Highway to prevent the underlying permafrost from melting. On rolling hills, the road turns left and right, up and down as if it is drunk or has no goal. Perhaps, it is trying to fool me, luring me to a destination that doesn’t exist. Despite all doubts and setbacks, I keep going north with the hope that this road will eventually bring me to a place I need to be.

Cycling the Dempster Highway, I become the road—quiet but full of reflections, wild yet at risk, free but connected to nature, and lost but ambitious.

On the Dempster Highway, the sky breathes deep and blue. If there is a paradise in this universe, its window opens here. The light is so pure that it washes over your eyes. When dark apocalyptic clouds cover the sky, a warm glow of ethereal light remains at the horizon as the last ray of hope for our fragile planet. As you move further up north, the scale of the landscape grows on you, putting even the biggest egos to shame. Humble, you do feel in this infinite landscape. On this seemingly endless and isolated road, you cannot help but feel a certain connection to nature which is strong enough to turn even the most stubborn souls into spirituals. 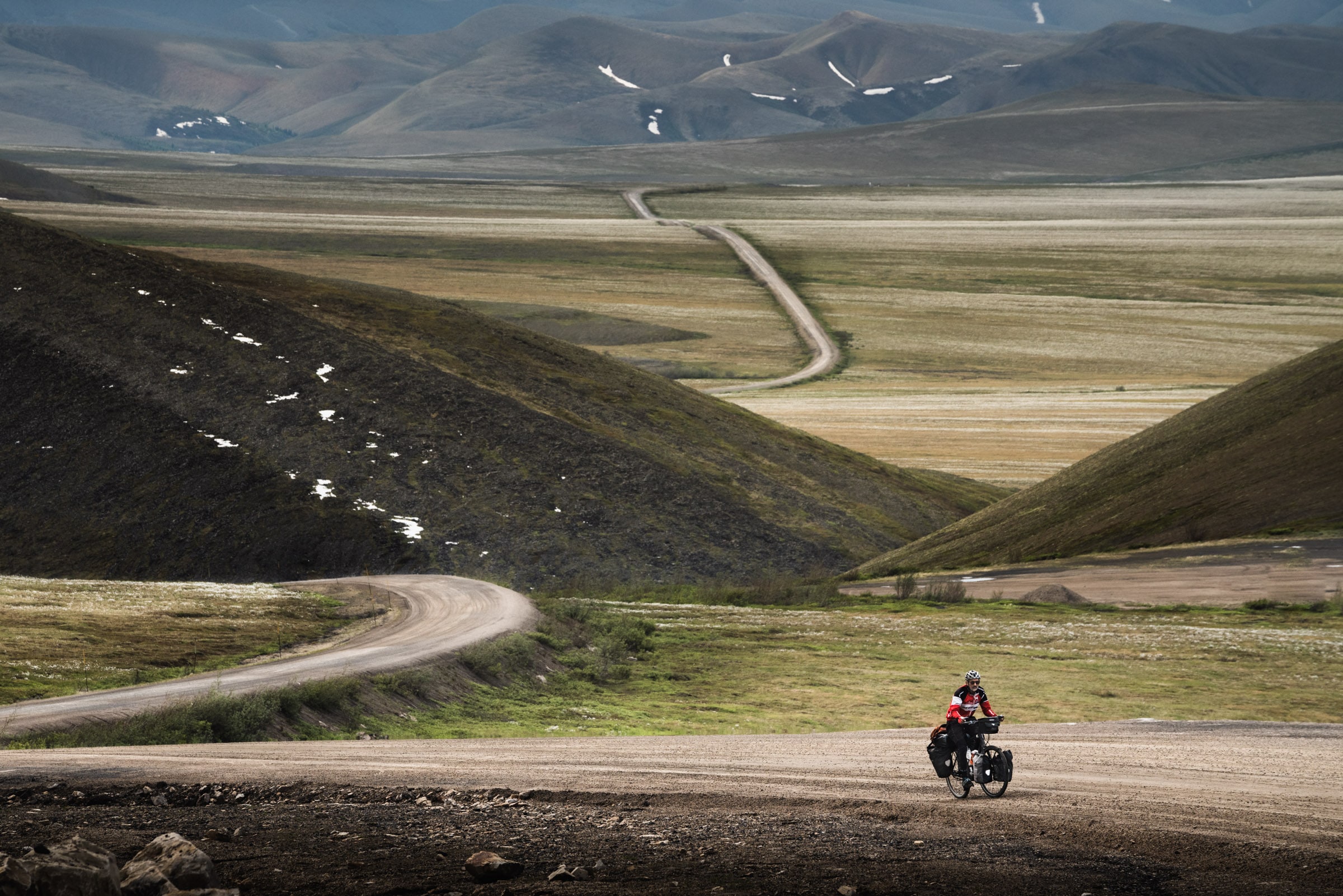 This is the traditional land of Hän, Gwich’in and Inuvialuit Peoples. I meet indigenous elders along the way who tell me stories of how they used to live back in the day and how climate change is affecting their lands. Their ancestors came to this region from Alaska and Yukon thousands of years ago as the Ice Sheets melted in the region. Harsh environment meant they couldn’t afford to wage wars and had to depend on each other for survival. Their peaceful genes are passed on to their descendants. “We are the true north,” a Gwich’in from Tsiigehtchic says about the indigenous hospitality.

I didn’t even know about the Dempster Highway a while ago, yet I end up taking this route to the Arctic Ocean. My journey through the Americas is not over though. I am back in Dawson City and will be soon heading to Alaska with another 1500 km to go before I hit the end of the road again in Prudhoe Bay.

What was supposed to be a two-week side trip turns out to be six-week-long travel as well as the most comprehensive and well-documented leg of this journey. I return with over 4000 photos/videos, 500 gigs of data, and 250 pages of a hand-written diary. Hopefully, I will be able to publish detailed accounts of the Dempster Highway one day.

In Tuktoyaktuk, freezing arctic wind pierces my body. I stand alone at the end of the road with a feeling of having been deceived by the road I have trusted my life with. I walk down to the shore and stare at the ocean and the sky, waiting for a divine revelation. After all, there must be a greater purpose of this journey for I have been seeking guidance from the omens throughout.

Gentle waves travelling thousands of kilometres reach the shore and quietly kiss my front tyre dipped in the Arctic Ocean. We both have travelled a long way, only to share this moment of quietness. All travellers eventually come to learn that there is no hidden treasure buried at the end of the journey that we all set out hoping to find. Destinations play no role other than to keep us travelling. And travel we must for a world is out there full of surprises each of them a treasure in its own.

Standing there, I continue to wonder. What if this journey was not linear and the road bent back to meet the beginning of this trip?

In a parallel world, I am back in Ushuaia, facing north, ready to begin this trip again. I am as anxious as I was last time. I take a deep breath and push the pedal down hoping to reach the Arctic Ocean one day. Little do I know that I will be cycling the Dempster Highway again!